The Toyota Camry was first brought to India more than 17 years ago, and it is a model that has been through various changes over three generations. Toyota India have managed to sell more than 11,000 units having been around since 2002, making its presence felt in the Indian market. It continues to appeal to certain buyers in our market, despite the invasion of SUVs in India. In 2019, Toyota had launched the Camry in its fourth generation avatar and the new car comes with bigger dimensions and better looks too. Dynamics-wise, the car is more sorted and it gets a hybrid powertrain. It is also priced higher than its main rival: the Skoda Superb. 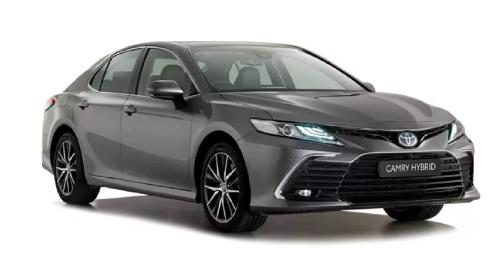 Know all about it

Internationally, this is considered the 8th-generation Camry by Toyota Cars, and it is based on Toyota’s New Global Architecture modular platform, which is majorly made up of high-tensile steel. The car is now lighter and structural rigidity has been enhanced too. Also, it is wider and longer than the previous Camry and the wheelbase is longer by 50mm. The Toyota Camry may be large, but there’s been a minor increase in weight by 30kgs. It is also powered by a 2.5-litre petrol engine, paired to a 4th-generation hybrid system, meaning power and economy have seen a step-up.

Toyota doesn’t make boring cars anymore and it is evident in the design language used on the Camry and the brand’s other products. The Toyota Camry gets all the crisp lines and smooth body panels it needs. At the front, it features a massive front grille that bodes well with the sleek headlights, featuring LED DRLs. Along the sides, what you get is a lovely waistline, a sloping roof and 18-inch multi-spoke alloy wheels, giving the car a sporty look. At the rear, there is an integrated spoiler and distinctive tail light with clear lens inserts.

Inside the Toyota Camry, you get a beige colour theme, giving a cabin an airy feel. The design of the dashboard is very typically Toyota with a Y-shaped pattern on the central console; it even gets onyx inserts around. The soft-touch plastics are top-notch, but the touchscreen could use some changes; the worst part being, it misses out on Android Auto and Apple CarPlay. If you love music, Toyota offers a 9-speaker JBL sound system that sounds fantastic. The seats up-front are big, comfortable and cooled. To help the driver get a better view of the road, the bonnet is now lower and the A-pillar is narrower. But the Toyota Camry will mostly be chauffeur driven, meaning most owners are bound to spend their time at the back. The seats at the back are like sofas, and while they are low-set, there is good legroom available. We were really impressed with the touch-operated controls in the rear armrest. The controls are used for the audio, rear sunshade and a rear AC. Coming to the features, the Camry is well equipped with leather upholstery, electric steering adjust, electric reclining rear seat, front seat cooling, head-up display, three-zone climate control, 9 airbags and ESP.

The Toyota Camry hybrid is powered by 2.5-litre, 4-cylinder petrol engine, producing 175bhp and 221Nm of torque – a significant improvement over the old car. Aiding the petrol engine is a 245V Nickel Hydride battery pack along with a new 4th-generation hybrid system motor generator that is lighter and comes with an output of 118bhp and 202Nm of torque, so that makes the total output of 215bhp. Even fuel efficiency has improved, delivering 23.27kpl. You don’t hear sounds or vibrations when you start the car, and if the battery has sufficient charge, the car will only run on battery power at low speeds. After the petrol engine kicks in, the change from electric to petrol is effortless. Cabin insulation is great, keeping noises and vibrations at bay.

The motor is refined for the most part and works well in the city. You can barely hear anything. The smooth nature of the engine helps the driver relax and cruise along efficiently. Power is always at your disposal and it is put down on the road in a linear manner. Overtaking is something the Toyota Camry is good at, particularly on highways because of the prompt response from the electric motor. Mated to the engine is an e-CVT which helps the engine deliver its power in an effortless way.